FutureThought was founded to provide reliable SEO forecasts for businesses, agencies and consultants. As a former forecasting sceptic, I've spent years learning about simple forecasting principles, captivated by the same mysterious complexity that drew me to SEO.

I've used the those principles over the last several years to build forecasts that have helped me win more pitches, set better expectations for clients and create dependable performance benchmarks.

Simply add us as a user in the relevant Google Analytics property and you're good to go. We may have a few questions about your historical data.

In 3-5 days, you'll receive your 12 month forecast. This includes monthly organic sessions plus a revenue and ROI forecast if data is available.

Present your forecast in our interactive report. You can model different session & revenue scenarios and the forecast automatically updates every month with actual values.

There are three parts to your FutureThought forecast:

There's an old quote I like from Mark Twain "history doesn't repeat itself, but it often rhymes". In statistical forecasting, we assume the future will resemble the past. The base forecast aims to capture the cyclical and seasonal patterns that exist in historical data, as well as how the trend is changing.

Using a minimum of two years of organic sessions data, we use statistical models to develop a monthly organic sessions forecast for the year, along with confidence intervals. During this process, we'll generally have some questions about your data. ie
This is to help the model fit your historical data as best as possible.

The organic sessions forecast is plot in a time series chart in our interactive report, appended to your historical data. There's also a 3 month rolling average added to the chart, which averages the three previous YoY % values and multiplies the average by last year's value for the forecast month.

It tends to be a great short-term predictor for next month's performance. 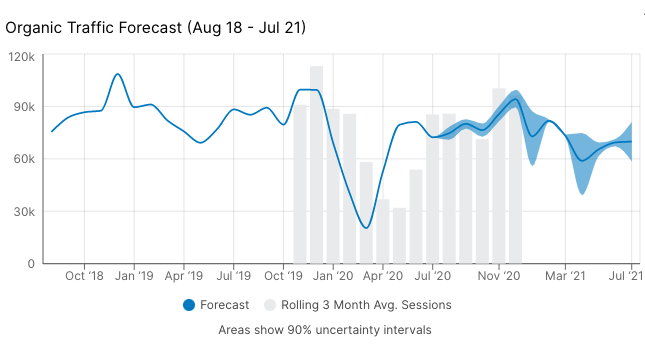 In SEO, base forecasts usually aren't enough. That's because whenever you forecast, it tends to be at an intervention point. That could be anything from new budgets, new objectives, to new clients.

Say for example you're an SEO agency pitching to win new business, a forecast built on the changing environment of the past won't be entirely reflective. That's because as an agency, you'd want to exceed where the client would have otherwise been without you.

Or let's say you're a business that has just received a significant volume of marketing investment. A base forecast wouldn't capture that. When new information emerges as a result of an intervention, base forecasts should be adjusted to improve forecast accuracy.

That’s why in FutureThought, we’ve provided some additional inputs in the interactive report to model various performance scenarios.

The base forecast tells you ‘based on your historical data you should achieve X’ and the interactive inputs are there as a layer of judgmental forecasting based on your domain expertise and any new information you have. They tell you ‘if you focus on Y, or if Z happens, you will achieve X.’

There are three different categories of inputs in the interactive report:

The two sessions inputs allow you to forecast sessions growth on top of your base forecast.

Input the % growth you’d expect to see on top of the base forecast. The report then adds the expected growth exponentially on your base forecast for the remainder of the forecast period.

This is useful for example if you’ve decided to target a group of keywords and have estimated the volume of additional organic sessions you’ll attract over the forecast period.

The inputs, as shown in the gif below, allow you to define confidence intervals ie. 30-50% so that you can add uncertainty to your forecasts.

If something unexpected happens, such as a tracking issue, algorithm update or an economic crisis, your forecast will need to be adjusted.

You can use the base forecast adjustment input as a quick way of modelling different scenarios and seeing their impact on the total summary for the forecast period.

For example, if you had a client negatively impacted by the global pandemic, you’d want to negatively adjust your forecast to take that into consideration.

As the forecast is updated with actual sessions every month, it will only adjust projected values for the remaining months of the forecast.

If you’re tracking revenue, you’ll want to see how your organic sessions forecast impacts your revenue.

Revenue forecasting in this way is slightly more challenging. That’s because you’re increasing the volume of variables you’re predicting, as well as multiplying those variables together.

That’s a whole lot of uncertainty bundled together.
In FutureThought you’ll get a default revenue forecast. This uses the base sessions forecast and average, historical seasonal indices for conversion rate and avg. order volume.

That means if you use the session assumptions to adjust your base forecast, your revenue forecast will change too.

There are two different ways to adjust the default avg. order value and conversion rate values for the forecast period:

You may want to change this by specifying your own avg. order value or avg. conversion rate estimates, and even define confidence intervals as shown below.

Estimate the growth of the default value

Another input you can use to model different revenue scenarios is: avg. conversion rate / avg. order value growth.

Here you can you specify the % the default avg. order value / conversions will grow by in the forecast period. The % is applied as an exponential curve on top of existing values.

Adding cost inputs helps you to understand your ROI over the forecast period.

In many ways, this is a truer reflection of ROI, as any revenue you achieve in addition to the base forecast is above what what you were already expecting.

There are two cost assumptions you can add:

Monthly costs such as your client retained fees can be added to the retained costs input. Much like all of the other inputs, you can add uncertainty by specifying intervals.

Whether you're working inside a business or for a business, you need to report progress against your forecast.

The interactive FutureThought report built with Causal, automatically updates every month with actual sessions and revenue values. The forecast adjusts over time to become more accurate.

You'll also get monthly report summaries across organic sessions, revenue and ROI that display last month's performance vs your forecast.

This data is also available as a raw Google Sheets spreadsheet, which can be used as a datasource for your reporting suite.

We're also soon going to be releasing a Data Studio report as a a more flexible and comprehensive forecasting reporting solution.

I'm going to be regularly updating FutureThought to help as many teams as possible with their SEO forecasting. I'll also be developing a course to explain my methodology in detail, so that you can create your own base forecasts.